As we commented in our last quarterly letter, the yield curve has been flattening, and is moving toward becoming inverted. An inverted yield curve occurs when long-term yields fall below short-term yields. The difference in these yields is measured by a spread. When the spread lowers to below zero, the yield curve is inverted. As of 7/26/2018, the spread on 10-year U.S. Treasurys over 2-year US Treasurys was 28.5 bps, down from a 2018 high of ~75 bps in early February and the lowest since the last recession.

Additionally, as illustrated below, the yield curve tends to flatten while the Federal Reserve (the “Fed”) is in a tightening cycle, which is the current environment. When the Fed increases rates, it does so by affecting the federal funds rate, an overnight rate that moves the short end of the yield curve higher. 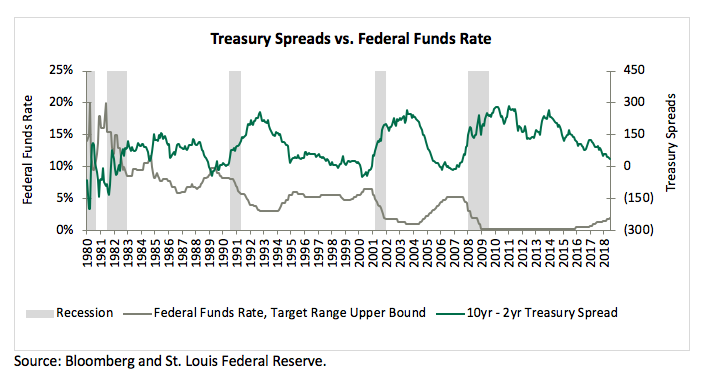 Numerous Fed officials, economists and market pundits have opined that a flattening of the yield curve is a major phenomenon to watch, as it has frequently preceded recession in the post-war era. Inversions of the yield curve have preceded the last seven recessions, with only two “false positives” (i.e., the yield curve inverted and a recession did not occur until after the next inversion). A flattening yield curve often portends recession because short-term rates have risen to a point where the bond market believes that GDP is going to slow and perhaps be negative (i.e., recession). Markets anticipate that inflation pressures would be lower, increasing the likelihood that the Fed would lower rates in the future to stimulate the economy and generate GDP growth.

While an inverted yield curve often portends recession, the actual inversion is not generally a signal to sell equities immediately. According to Bank of Montreal, a recession (i.e., two consecutive quarters of negative GDP growth) follows the inversion of the yield curve by 15 months on average. In this regard, Scott Minerd, the Chief Investment Officer at Guggenheim Investment Management recently noted that current data were in line with their model, forecasting a recession in 2020. Additionally, former Fed chief Janet Yellen opined in June that trade policy (discussed below) and high valuations have created an environment ripe for shocks. She also noted that a long period of stability (the current expansion is almost the longest in US history) can, over time, induce instability, and that the Fed may continue to raise rates to test the limits of tightening. Thus, we are closely monitoring the yield curve and are currently advising our clients to trim public equity positions when appropriate, potentially to below policy targets. Thus, we revise our posture on global public equities to underweight, and we may recommend more aggressive selling if the yield curve does, in fact, invert.